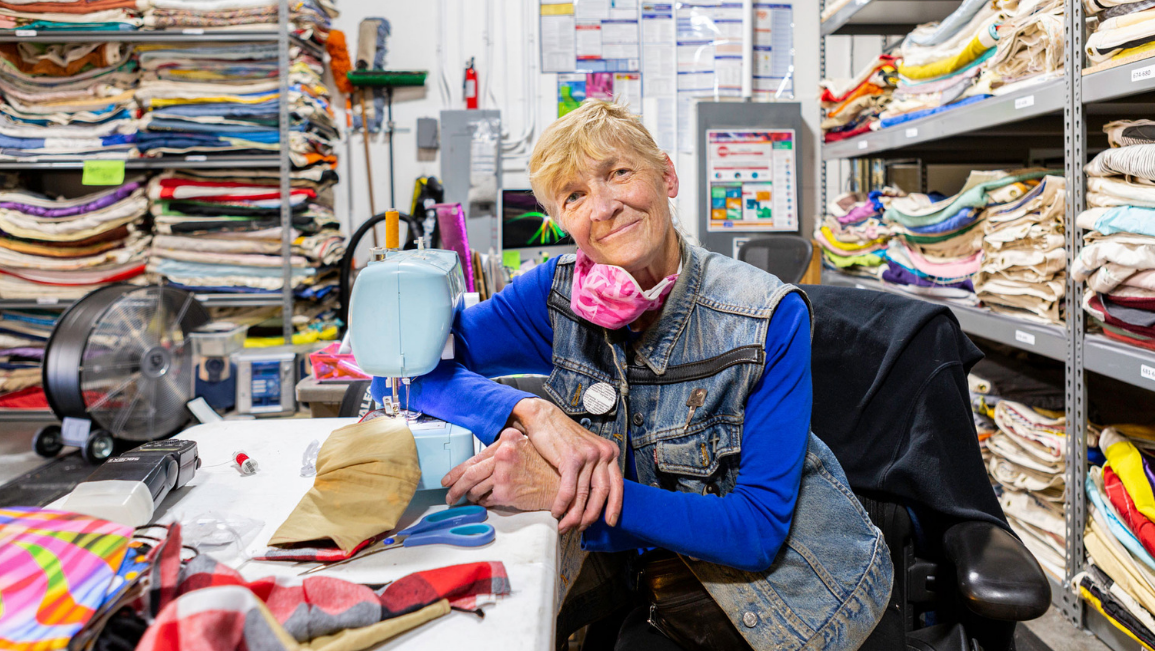 Gert McMullin has been helping sew and repair the NAMES Project AIDS Memorial Quilt since its inception in 1987. Since the 2020 passing of Tom Taylor, a friend of Rainbow Flag creator Gilbert Baker and longtime SF Pride supporter, Gert has also begun volunteering her time to fix the flags that adorn Market Street every June — and which can take a heavy beating in the wind.

This Q&A, conducted in winter 2021, has been condensed and lightly edited for clarity.

Thank you for fixing our flags!

I’ve done about 24, and I just picked up a whole load of them. I got about half of those done, because I know the guy who was fixing them had died and it was an honor.

You’ve been with the AIDS Quilt for 33 years now.

I’m considered a founder with Cleve Jones and Mike Smith, because I’ve been there since Day 1. I’ve gotten to do all the great things with the Quilt going on tour. My primary job is the production of putting the 12x12s together. The edging around the grommets sometimes tears out when people hang them, but some of it is just old age. There are so many articles and pieces of jewelry on the Quilt, and then there’s the new panels that come in. I have to go through them, sew them together and edge them and grommet them and get them ready to photograph.

You’ve worked on every single panel?

They’ve all been through my hands at one point or another. We have over 6,000 12x12 units, so that’s about 60 tons of material. It’s in San Leandro right now, near the airport. Unfortunately, we couldn’t do displays this year. 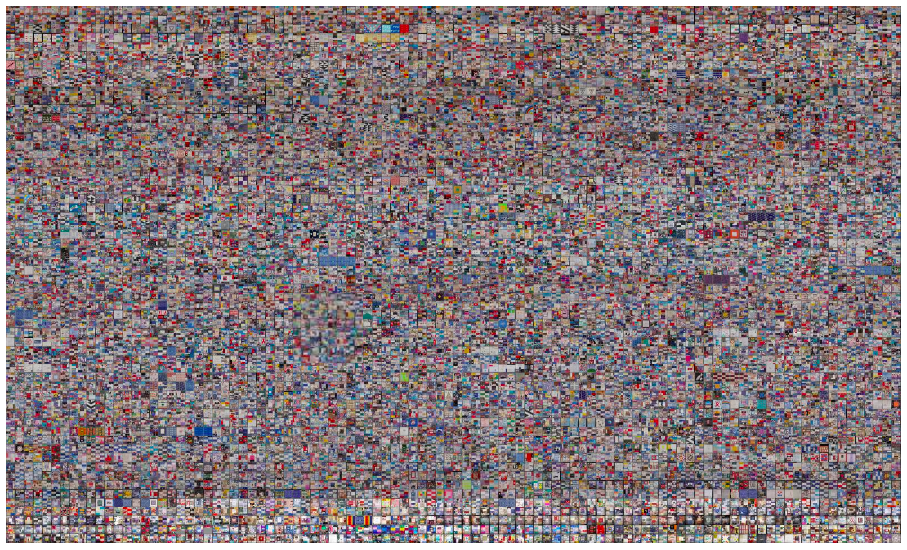 Do you see names of people you knew?

I’ve made over 100 panels of people I’ve known. I’ve found out people have died through the Quilt. Once I get it sewn up, I enter all the information that came with the panel into the database so you can find them and search them online. I feel like I’ve gotten to know some of them, because I’ve helped so many thousands of people.

What are the guidelines for each panel?

They’re supposed to be 3-foot-by-6-foot, the size of a grave, because we were laying out the dead down at the White House [for the 1987 National March on Washington for Lesbian and Gay rights] and we were showing how much space it would take up if it was a graveyard.

Each one is supposed to have the name or initials of someone who died of AIDS. Those are our basic rules, but they can put any embellishment on it. The only thing I had to take off was a lightbulb. At first, we were a lot stricter. Once, I was trying to explain this to a guy who tried to put an AC vent on it, and he went off on me and Cleve. So I agreed: OK! We’ve got pony sticks, everything you could imagine. I had to take a hypodermic needle off it once, but we go out of our way. 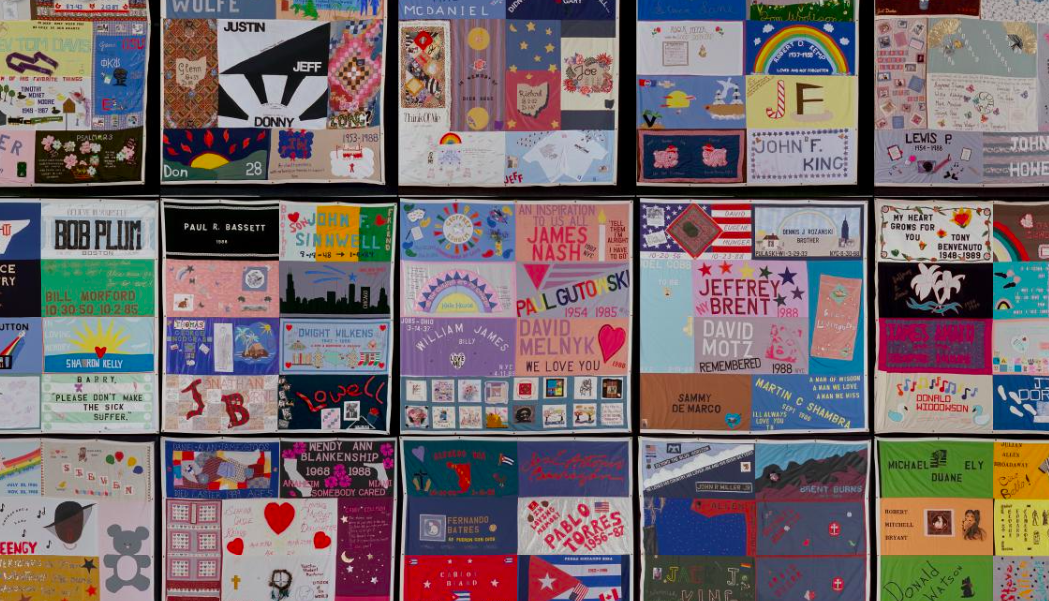 Is there any one panel you’ve lavished a lot of time and attention on?

There’s one that a friend of mine named Michael made for Michael Duddy from Houston. That Michael used to make jewelry, and he slathered it in every piece of Michael’s jewelry that he could find. We know it has lost a lot. When people have the Quilt outside, they bring pieces of jewelry to us and we know where it goes. I’ve given him a lot of my different pieces, and somebody wanted to cover it in a mesh so they didn’t have to worry about the jewelry falling off so we called the other Michael to ask and he said, “Leave it the way it is. Pretend he’s just giving his jewelry away.” 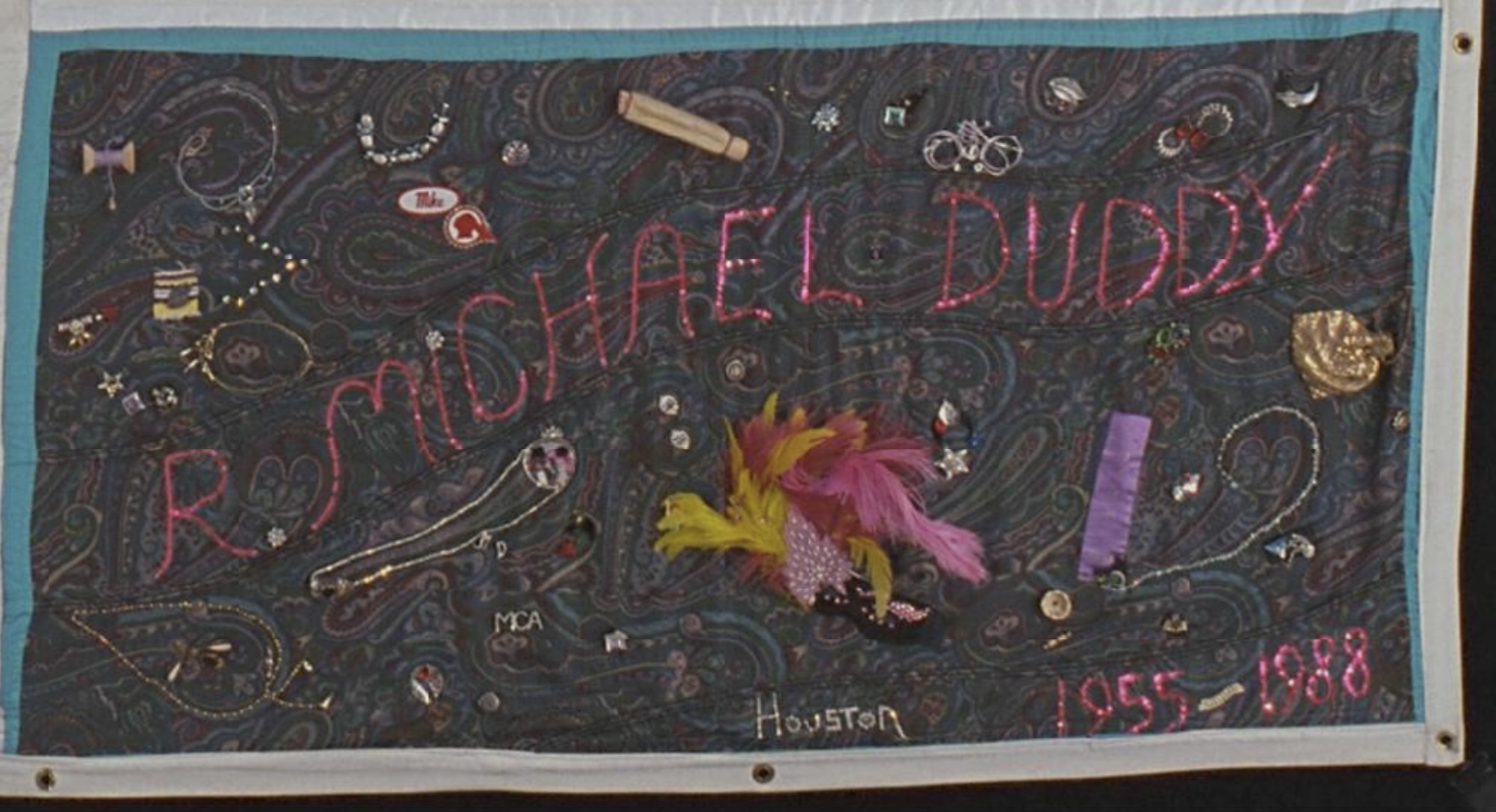 You must have some unsolved mysteries.

With other items, I’ve put things out on a signature square: “If you know where I go, call Gert.” And once somebody did! It was a photograph. It was really sweet. I figured, “This’ll never happen, but what the hell?” And people really read this stuff! People get back to us.

That’s a lot of work! Yet you’ve taken on this other project for us.

Mike Smith, the co-founder of the Quilt, asked me. The guy who was doing them was using an iron to melt them instead of sewing them and I had them all over the floor the other night, seeing where the damage is. I’ve had to slice maybe 4 inches off and re-hem it because quite a few are shredding badly, so I got halfway done with whatever they gave me. I’ve been able to fix almost all of them.

Because I thought the Pride parade was the place that deserved it, I gave a 13-by-15 piece of mile-long Pride flag I owned to [SF Pride Executive Assistant] Shannon the other day. I put a picture of Gilbert on it. I said, “It was sewn by Gilbert, so cherish it!” The Quilt has a deal with the Library of Congress, and I may give them one for posterity, but I want to make sure if anybody could really use one that I could get it to them! I have another four or five pieces.

How did all this start?

I grew up in Oakland, and moved to San Francisco very young in life, and met Cleve in 1986. I knew of him before that. I lived in San Francisco, and all my friends have always been gay men. I lived close to the Castro and went on some demonstrations when Harvey Milk got killed. I met Cleve the year before the Quilt started and Gilbert immediately after that. I knew him through Pink Saturday. Gilbert used to come down and sew for us and make banners. I can’t say I was best friends with him, but we were close. Most of the people I know have big personalities.

I used to work in theater, managed a lot of live shows. I worked at Macy’s and sold men’s cologne and makeup but I quit both of those in 1987. I never went back to my jobs, so I volunteered at the NAMES Project for a year. I had money and I could do that stuff, and I remember Cleve walking by and I couldn’t pay my rent and he said, “OK, let’s pay you just enough to pay rent.” That’s my job that I’m lucky enough to have. The National AIDS Memorial Grove took us on, so now my boss is John Cunningham. I love them. They’re fabulous — all of those people. As horrific as my life could have been during the ’80s and ’90s, I wouldn’t change a thing.