On the last weekend of June 1970, to commemorate the Stonewall Uprising on the other side of the continent a year earlier, LGBTQ activists in San Francisco held a small march down Polk Street followed by a “gay-in” at Golden Gate Park. 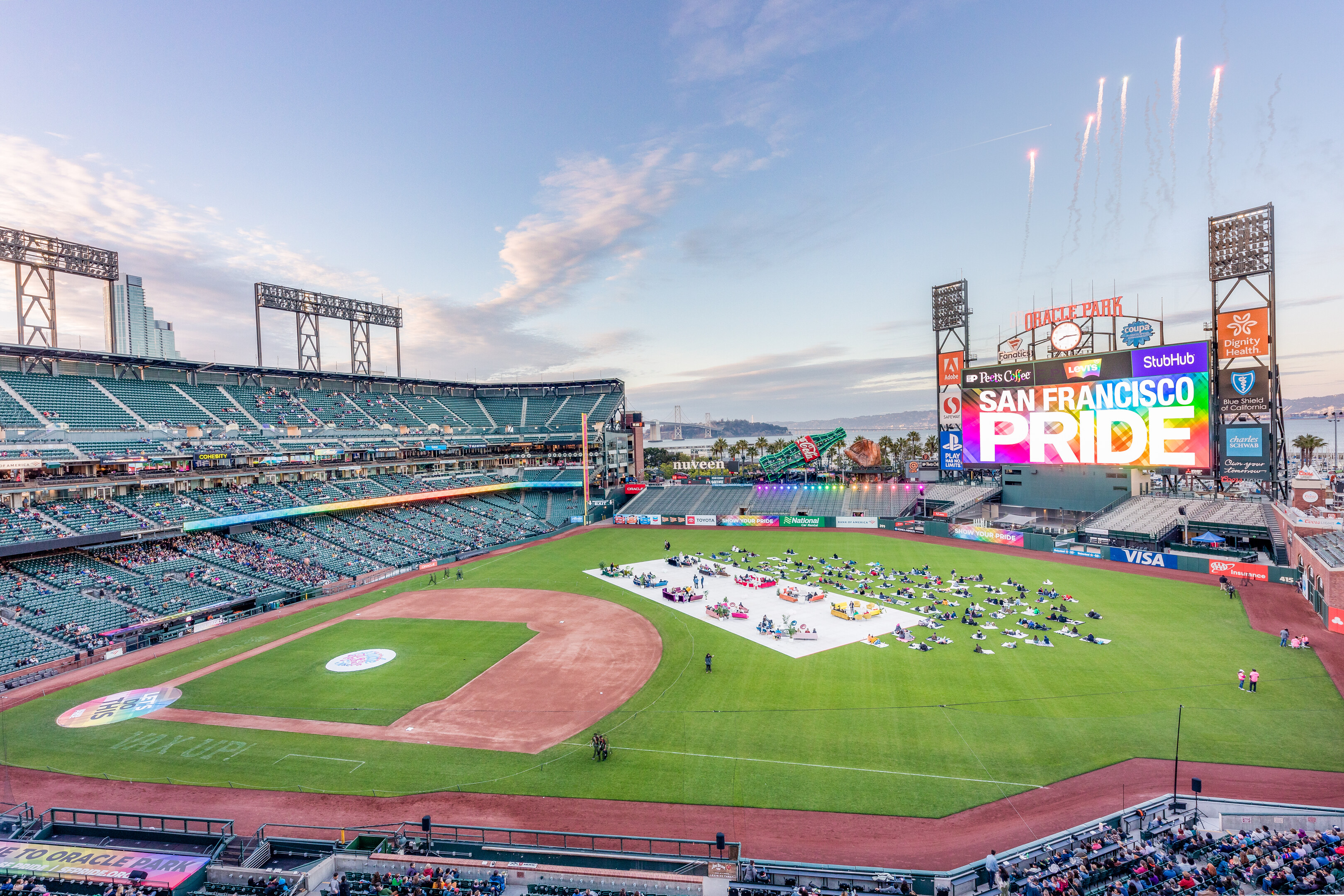 These actions — the nuclei of the Parade and two-day Celebration that have comprised San Francisco Pride for decades — also formed the heart of #SFPride51, which was initially expected to draw hundreds of thousands of revelers to Civic Center, as well as more than 100,000 spectators cheering on some 280 contingents with 50,000 marchers to the Parade down Market Street.

Owing to the ongoing COVID-19 pandemic, the Board of Directors of San Francisco Pride decided not to mount large-scale, in-person events for the second year in a row. Unlike 2020’s largely virtual Pride, however, the organization opted to strengthen ties with other nonprofit organizations in San Francisco. On June 11-12, SF Pride partnered with Giants Enterprises and Frameline, the long-running LGBTQ+ film festival, on Pride Movie Nights at Oracle Park, and on June 18, we supported the African American Art & Culture Complex on a Solidarity Rally for Juneteenth.

In our effort to broaden our reach and highlight leaders in the various communities under the overall LGBTQ+ rainbow, we also began an initiative called ‘SF Pride 365’ to deliver content throughout the calendar year. In addition to the third annual SF Pride Pro-Am Golf Tournament (Oct. 8-9 at TPC Harding Park) as well as the inaugural Ken Jones Memorial Awards Reception and Fundraiser (Thursday, Oct. 14, at the Cityscape Lounge in the Hilton Union Square Hotel).

San Francisco Pride is, to put it succinctly, a small team. With a staff of five full-time employees plus a handful of contractors, and a Board of Directors that counts only 10 members for the 2020-21 term, it is considerably smaller than the organization’s visibility and historical clout might suggest.

As suggested by SF Pride member David Hyman and voted on by the overall membership, the theme for 2021 is “All in This Together.” To that end, SF Pride worked with queer-identified artist James Hion to create a set of key art images that embodied the visual principles of joy and inclusivity, executed in a graffiti style appropriate to the resurgence of street art and muralismo around the Bay Area.

Befitting a smaller-scale Pride celebration, the Board opted for a slightly smaller set of honorees for 2021. There are six individual and one organizational Community Grand Marshals, and one additional recipient of the Lifetime Achievement Award. While Pride Month is now behind us, recognition of their work for our communities is not. We plan to engage with the various awardees via our SF Pride 365 initiative throughout the summer, and they will be lauded at an awards ceremony in October.

Clair Farley
Executive Director of the Office of Transgender Initiatives, and Senior Advisor to Mayor London Breed
SF Pride Board of Directors’ Choices

* SF Pride supported the AAACC on their Juneteenth Solidarity Rally

On March 25, SF Pride partnered with the Chinese Culture Center of San Francisco (CCC) on Chinatown Pride, a gesture of solidarity between historically marginalized communities that have never collaborated on an event of this scale before. A combination drag show, video compilation, and tour of neighborhood landmarks, Chinatown Pride built upon an existing project called Women: From Her to Here that CCC had installed in their gallery space.

This hour-long online fundraiser generated valuable financial support of more than $10,000, during one of the most challenging times for small arts and culture nonprofits. We're grateful to those who donated and joined us.

Highlighting the work of artists and writers such as Chelsea Wong, Arthur Dong, Tina Takemoto, and Heesoo Kwon, Chinatown Pride culminated in a drag performance by Pearl Teese shot by queer Latinx filmmaker Stephen Quinones on the pedestrian bridge connecting Portsmouth Square to the Hilton Hotel.

This partnership with Giants Enterprises and the long-running LGBTQ+ film festival, Frameline45 came as the world of professional sports has begun to make enormous strides in LGBTQ+ inclusion and representation more generally. To kick off Pride Month, the San Francisco Giants wore uniforms with inclusive patches in the colors of the Progress Flag in a game against the Chicago Cubs (“Pride Day,” June 5). 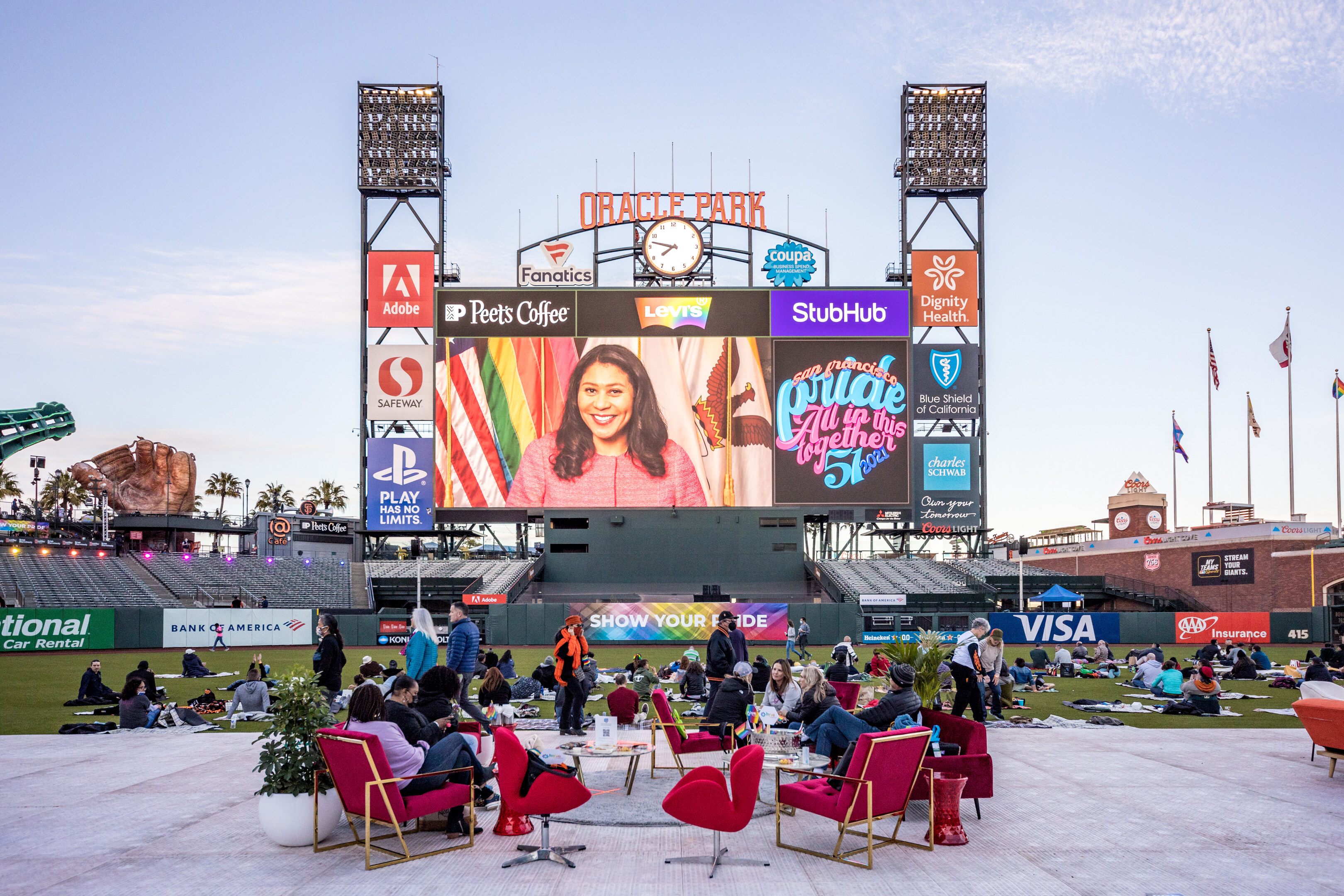 One week later, Pride Movie Night at Oracle Park screened two films. On Friday, June 11, some 6,000 fans watched Jon M. Chu’s adaptation of Lin-Manuel Miranda’s musical In The Heights on the largest Jumbotron in Major League Baseball, while on Saturday, June 12, an audience of approximately 4,000 people was treated to the more expressly LGBTQ-themed West End musical Everybody’s Talking About Jamie. To make this event as accessible as possible, ticket prices began at $19.99, with several tiers up to an on-field pod experience for up to 12 people, at $199.99 each.

Because Frameline45 is a world-renowned film festival, the staff of both organizations endeavored to create a proper Red Carpet experience for VIPs and invited media on both evenings. At one point, we ferried a drag queen — San Francisco’s reigning empress, Juanita MORE! — across the stadium in a golf cart, along with her equally photogenic companion in a full-size puppy costume.

While movie-goers were primarily there for the feature films, Pride curated two diverse, hour-long pre-shows that combined local DJs and drag performers with nationally recognized names (such as hostess Rock M. Sakura, a RuPaul’s Drag Race competitor) along with live and pre-recorded announcements from elected officials. Gov. Gavin Newsom and Mayor London N. Breed each delivered remarks, as did the openly gay state Sen. Scott Wiener and Sup. Rafael Mandelman, who district encompasses the Castro. But the most impassioned oratory came from Speaker Nancy Pelosi, who went on to introduce SF Pride Executive Director Fred Lopez. Additionally and in keeping with SF Pride’s belief in centering Black voices, both films opened with performances of “Lift Every Voice and Sing,” the Black national anthem.

Check out this great video from our friends at Cogs & Marvel to see what an amazing time we had at Oracle Park!

To produce events of this scale — and for the first time at that! — SF Pride has partnered with several extraordinary organizations.

Early on, the collaboration with the Chinese Culture Center of San Francisco yielded a truly exceptional fundraiser and long-overdue survey of LGBTQ+ culture in a historic neighborhood (Chinatown Pride, March 25).

Perhaps the strongest synthesis was between SF Pride and the African American Art & Culture Center. AAACC co-executive directors Melonie Green and Melorra Green — affectionately known as “The Twins” — were selected as Community Grand Marshals for 2021, and SF Pride lent our support to a wonderful Juneteenth solidarity rally at their site on Friday, June 18. (The two organizations had worked together on a similar, smaller-scale event in 2020.) The fact that Juneteenth won recognition as a federal holiday this year underscores its importance in the quest for social justice, and also buttresses Board President Carolyn Wysinger’s longstanding belief that the fights for LGBTQ+ liberation and racial equality are inextricably linked.

As we have done in years past, SF Pride worked with the volunteer-management team at TurnOut to ensure that Pride Movie Night at Oracle Park functioned smoothly. We simply could not have executed our vision without the more than 100 generous individuals over both nights who assisted both our team and Frameline’s.

Partnerships go in both directions, as well. Without a traditional Parade and Celebration, we chose not to produce our print magazine, Inside Pride, but we curated a Community Events Calendar with user-generated submissions, to function as a one-stop shop for anyone looking for LGBTQ-focused activities during Pride Month.

We look forward to resuming our longstanding tradition of actively providing direct financial support to nonprofits that serve the Bay Area's LGBTQ+ communities.

To remain fresh and relevant in the eyes of our various communities, we embarked upon this new initiative, consisting of three distinct types of content produced three Thursdays every month, aimed at centering the voices and lived experiences of our trans, nonbinary, and gender-nonconforming siblings as well as the perspectives of LGBTQ+ people of color.

The Queerness is a podcast hosted by Peter-Astrid Kane, with music by noted Bay Area DJ La Frida, that has thus far recorded some six episodes, available on all streaming platforms. Inside Pride is a series of video conversations with rotating hosts designed to give viewers greater insight into our organization’s place in the region’s overall LGBTQ+ communities. Community Partner Spotlights are Q&A-style interviews intended to highlight lesser-known members of our communities who have nonetheless done outstanding work.

It is partly due to the growing popularity of our social media channels and newsletter subscribers list that we were able to sell thousands of tickets to Pride Movie Night at Oracle Park. This brand-new event, unlike anything SF Pride presented in the past, was a great opportunity for us to reach new followers.

As a direct result of our partnerships with Cogs + Marvel (for creative and experiential design) and Islett Agency (for social-media management) SF Pride was able to surpass the crucial 10K mark in our Instagram follower count during Pride Month.

This enables the use of features that were not available to us before, namely the ability to swipe up in Stories to access our site directly.

Especially given our communities' shift to online and virtual interactions in the face of a pandemic, we are grateful to our social media partners for increasing our engagement opportunities. We routinely get hundreds more "likes" per post than we did at the beginning of 2021. Our best-performing post of the year, from early July, garnered over 1,300 likes. We are hopeful that we will build on this momentum and keep growing!

We hope to see you at our Third Annual SF Pride Golf Tournament at TPC Harding Park on Oct. 8-9 and our Ken Jones Memorial Awards Reception on Oct. 14!